Cruising on the Aisne river

Despite damage inflicted in the wars, the 13/15th century Basilica of Saint Quentin, an imposing Gothic monument with its unusual black and white flagstone labyrinth on the nave floor, has survived.  The Hotel de Ville is a masterpiece of late Gothic architecture and the Musée Antoine-Lécuyer features works of the pastel artist, Maurice Quentin de la Tour, who was born and died here;  the Musée des Papillons has a fabulous butterfly collection. To the north is the fascinating textile factory of La Filandière.

Towns in the Aisne

Book a hotel in Aisne

Book a holiday cottage in Picardy

The Aisne is rich in historic monuments. At Guise, home of Godin stoves with its interesting ‘familistère’ built to accommodate the workers, the Castle has an amazing labyrinth of vaulted rooms, whilst the Le Creuset factory is at Fresnoy le Grande. To the north east, the Benedictine Abbey of Saint Michel has imposing simple architecture whilst in the forest of Vauclair, the beautiful ruined Cistercian Abbey has a medicinal herb garden. In the forest of Gobain, the elegant 12th century Abbey of Prémontré has an 18th century courtyard and superb gardens. Victor Hugo was moved to comment on the beauty of Laon, a medieval hill top city with ramparts, fortified gates and a wealth of historic buildings. Its magnificent 12th century gothic cathedral dominates the landscape.

Much bombarded, as early as the Franco-Prussian war, the Cathedral of Soisson (capital of the first Merovingian kings) has been well restored with beautiful stained glass windows and its spire soaring over the countryside. The abbey of Saint-Jean-des-Vignes is an exceptional monument and amongst its parks and gardens is that of the Horticultural Society. There are many wartime sites with devastated villages which have been entirely rebuilt. The famous ‘Chemins des Dames’ south of Laon, route of the daughters of Louis 15th, saw conflict in the times of Julius Caesar and Napoleon, but is best known for the fierce fighting in World War I. The “Caverne du Dragon’, a 12th century stone quarry, occupied by both Germans and French, is now a museum.

There is a formidable ruined fortress at Coucy le Château whilst at Condé en Brie, the elegant 18th Century Château home of the Bourbon family, remains full of superb treasures and works of art. This is Champagne country where the vineyards extend on either side of the River Marne. Château Thierry, birthplace of Jean de La Fontaine, has a museum to commemorate him and medieval champagne cellars. The remains of the Castle of Fere with its splendid arched bridge, lie to the north east. The pretty village of La Ferté-Milon on the banks of the Ourcq canal is overlooked by an unfinished Chateau and a painting school occupies the mansion where Jean de la Fontaine was married. The Thiérache region is a gourmet’s delight with Maroilles cheese, foie gras, cider and champagne. Copyright: Sarah Francis 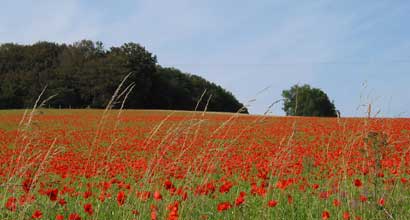 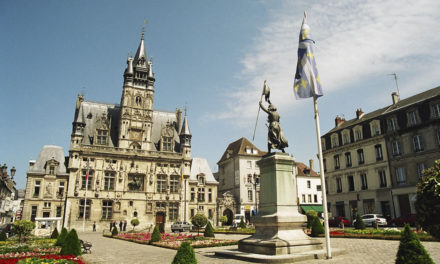 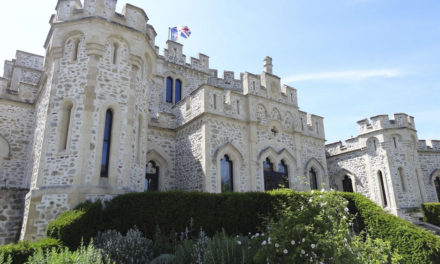