Haute Corse is the northern department of Corsica, less developed than the south, with long unspoilt sandy beaches and a depopulated wilderness in the mountainous interior with nothing but lizards and eagles for company. You arrive in Bastia, second biggest city on the island, a major harbour with large ferries, a marina full of shiny white yachts, fishing boats, nets and lobster pots. The Genoese citadel shelters narrow streets of tall houses below which the sea stretches to the island of Elba a few kilometres away. In the shady streets of Bastia you can find traditional artisans and shop for olive oil, pates, cured hams from pigs fed with chestnuts, flavourful cheeses and herb-scented honey. Cap Corse is the last long finger of the island pointing to the north, with winding corniche roads, Genoese watch towers, sandy beaches and villages are tucked defensively into inland valleys. The other side of Cap Corse is St Florent, the Corsican St Tropez, cradled by hills with its harbour fringed with palm trees and flowering oleander.  To the north is Nonza, perched on a rocky outcrop over the sea, its pink and blue pastel-painted houses stacked on the hillside like a cubist painting. West of St Florent is the desert des Agriates, once planted with olives, vines and peaches, now depopulated and ravaged by fires, a dramatic landscape returning to nature as a protected area.

Towns in the Haute Corse

Book a Hotel in Haute Corse

Rent a Luxury Villa in Corsica

Book a Holiday Cottage in Corsica

Balagne, to the west is a mountainous region terraced with olives and dotted with tiny villages overlooked by Monte Cinto, Corsica’s highest peak. Here some of the traditional domed stone bergers’ cabins, originally used for keeping hay and making cheese, have been restored as simple accommodation. Don’t miss San Antonino, perched on a rocky crest, a fortified warren of tunnelled streets. Calvi, capital of the Balagne, is another harbour town – it was here Nelson lost his eye in 1794. There is a dramatic citadel, marina, restaurants, shops selling terracotta dishes, baskets and leather sandals. The Foreign Legion has a barracks here and the soldiers in their white helmets and red epaulettes add a distinctive colonial touch.

Central Corsica lies at the heart of Corsican history, when Corte was capital of an independent Corsica under Pascal Paoli during the years 1755-1769. Corte is now a young and lively city with a thriving university. The best way to get there is via the narrow-gauge railway, a spectacular trip through the mountains between Bastia and Ajaccio. Built on a rocky outcrop at the heart of the Corsica Regional Nature Park, Corte is a perfect centre for hiking and exploring the mountains, the waterfalls of the Ascu valley, the high plateau of the Niolo and Corsica’s highest peaks including Monte Cintu. To the south is the Venachese, with its high pastures and waterfalls.

The eastern coast of Corsica boasts long flat beaches edged by shady umbrella pines. Inland is an agricultural region, well watered by the rivers that flow from the mountains. Here are grown clementines, kiwis, grapefruits, avocados and grapes, which are turned into increasingly good quality wine. Inland are the forests of the Castagniccia, named for its chestnut trees, once the staple diet of the island. In the villages you can still see stone roofed houses with their chestnut drying rooms. This is a perfect place for forest walks, discovering remote villages and baroque churches. Further south is the region of Ghisoni and Mont Renoso, one of Corsica’s highest peaks and a beautiful winter ski resort in a stunning natural landscape. 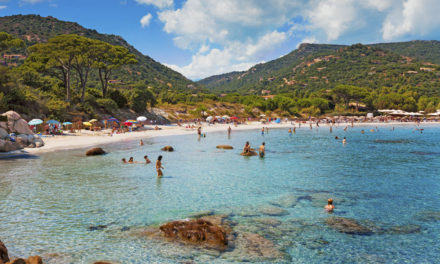