The Casino Barrière at Enghien-Les-Bains

The Château and gardens at Ambleville are a wonderful example of the Italian renaissance style. The terrace was inspired by the Tuscan garden of the Villa Gamberaia and the ‘sun garden’ featuring a giant chessboard, created with 8,700 narcissi and yew trees shaped as chess pieces, is open to the public from mid April to early May. The medieval and 18th century Château de la Roche-Guyon with its keep occupies a commanding position set against the chalk cliffs overlooking the Seine valley and has borne testimony to over 1,000 years of history. The property of the La Rochefoucauld family for many years, its underground stairways, troglodyte galleries and 18th century salons are open to the public. The wall hangings originally ordered by the Duchess of Enville in the 18th century now hang in the Château. At Ecouen, the imposing Château is home to the Musée National de la Renaissance with an exceptional collection of 16th century tapestry, furniture and ceramics.The Château de Villarceaux, comprising the Château du Haut, dating from 1754 and the Ninon de Lenclos Renaissance Pavilion, visited by the young Voltaire amongst other famous characters, are set in superb grounds with ornamental lakes, ponds, mirrors and fountains.

Towns in the Val d'Oise

At Asnières sur Oise, the imposing and magnificently preserved Abbaye de Royaumont spans history from its foundation in 1228 by Saint Louis to the Cystercian abbey of today with the largest cloisters in France and with a centre for music from the Middle Ages. The former royal residence at Pontoise has a dramatic cathedral featuring a renaissance dome, 12th century chevet and flamboyant tower. At the Pissaro and Tavel-Delacourt museums you can view works by several artists including Matisse, Valmier, Daumier and Pissaro. Nearby at St Ouen L’Aumône, the Abbaye de Maubuisson founded in 1236 by Blanche de Castille has many exhibitions and events and is also worthy of a visit. In stark contrast, the spa town of Enghien-les-Bains with its lake has the only casino in the Paris region where, in a throwback to the 20’s, gamblers indulge in Black Jack, Baccarat and Roulette.

In the house in Montmorency where Rousseau lived for many years, is the Musée de Jean-Jacques Rousseau, author of “Héloise, Emile and the ‘Contrat Social’. The Val d’Oise has eight golf courses. You can ride in the Vexin, canoe on the Epte, paraglyde at Saint-Clair-sur-Epte or hike on the Route des Crêtes which runs from La Roche-Guyon to Saint-Cyr-en-Arthies. At Sannois, the Musée Utrillo-Valadon features the works of Utrillo, especially from his ‘white period’ and those of his mother, Suzanne Valadon. Here, too, is one of the best preserved windmills in France, listed in 1975 and open every Sunday afternoon to visitors.

At Auvers-sur-Oise you can take a trip in a wooden railway carriage through the countryside that inspired the impressionists, past the banks of the Seine and the Oise. The Château offers an infra red journey through the era of Monet, Pissarro, Cézanne and Daubigny and a 3D film of the last days of Van Gogh who, together with his brother, Théo, died there and are buried in the cemetery At the Auberge de Ravoux you can visit the bedroom of Van Gogh whilst the Maison-Atlier de Daubigny, built in 1861 still bears the testament of Daubigny’s work on the walls and that of his friends, Corot, Daumier and Berthe Morisot. The Musée de l’Absinthe recreates the period of these impressionists before the prohibition of absinthe in 1915. Nearby is the Ile d’Adam, accessible by boat from Auvers. The Cassan Chinese Pavilion, reputed to be the design of Fragonard is one of only three 18th century follies remaining in France. With its double pagoda roof and rich interior decoration it is in the park of the Château de Cassan on L’Isle-Adam. 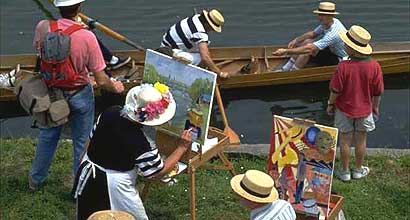 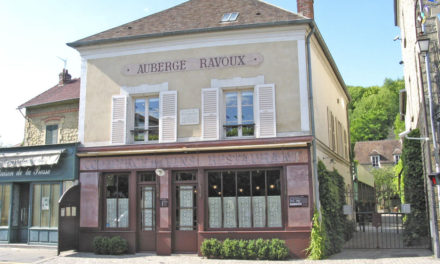