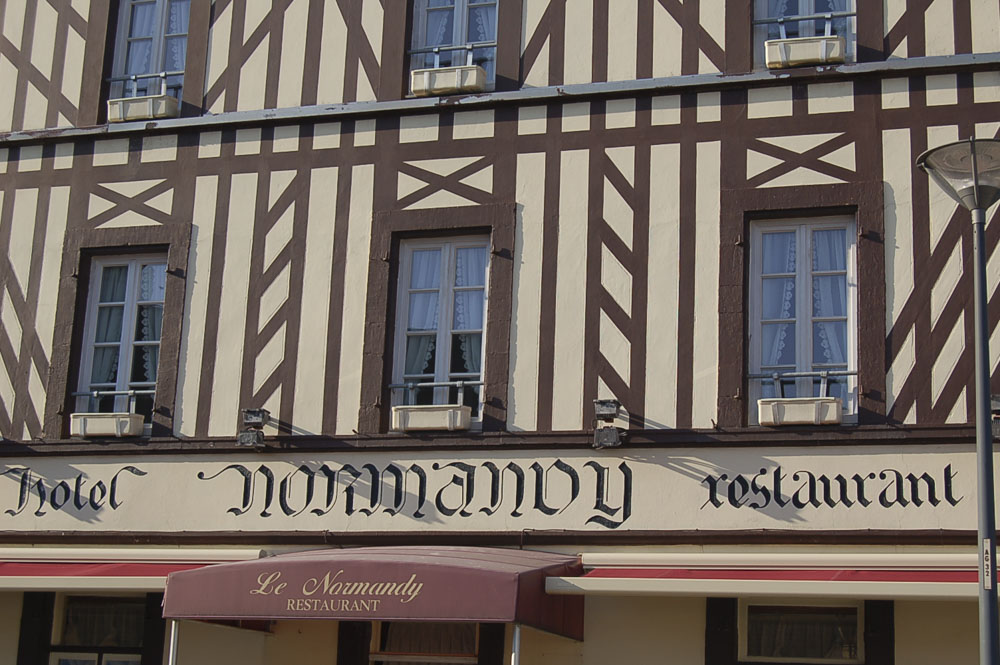 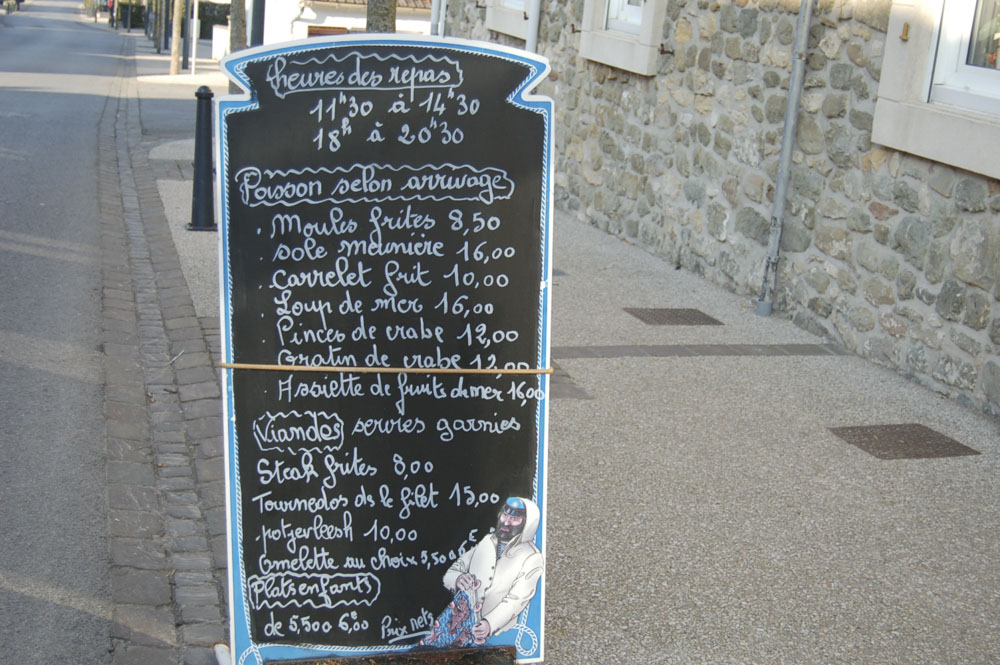 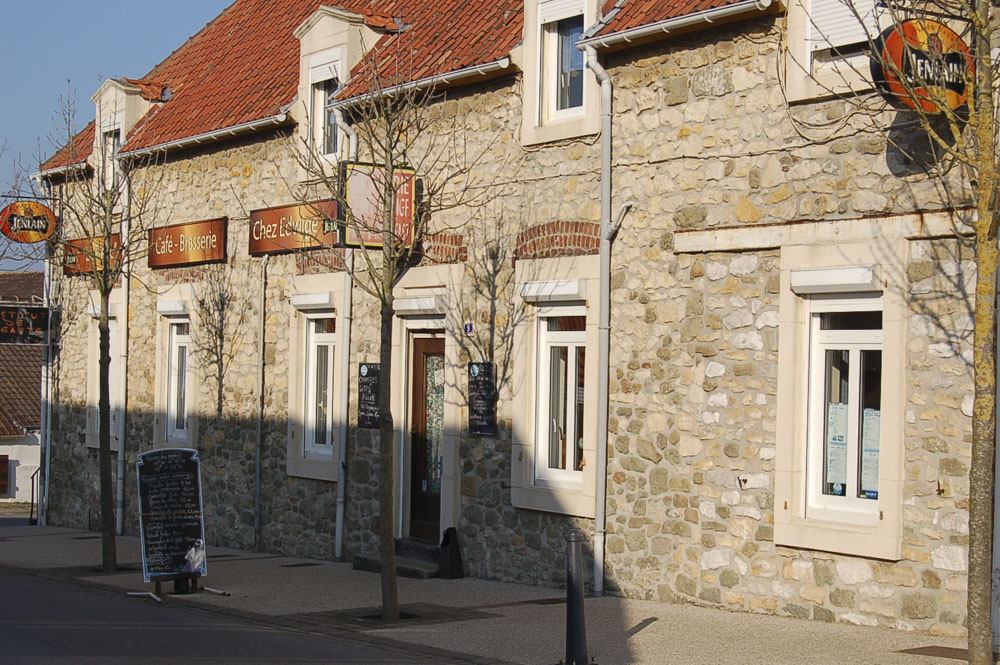 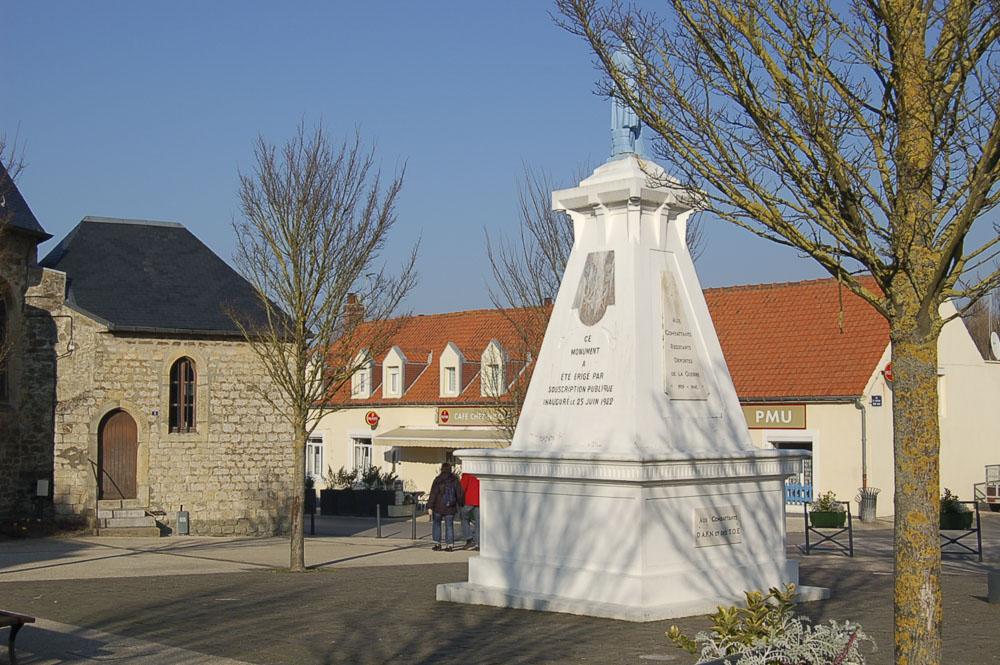 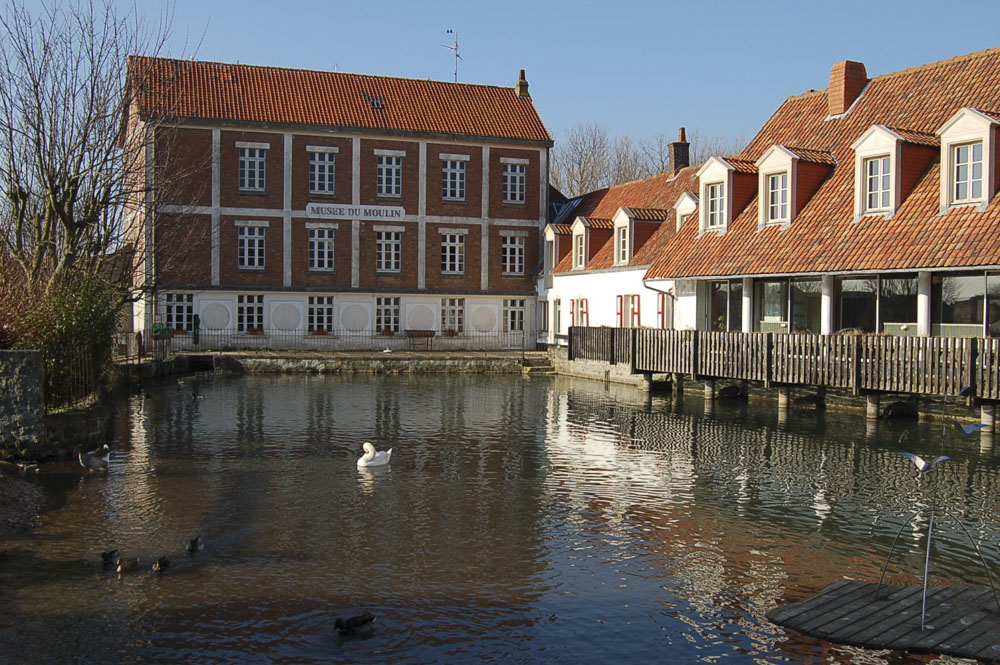 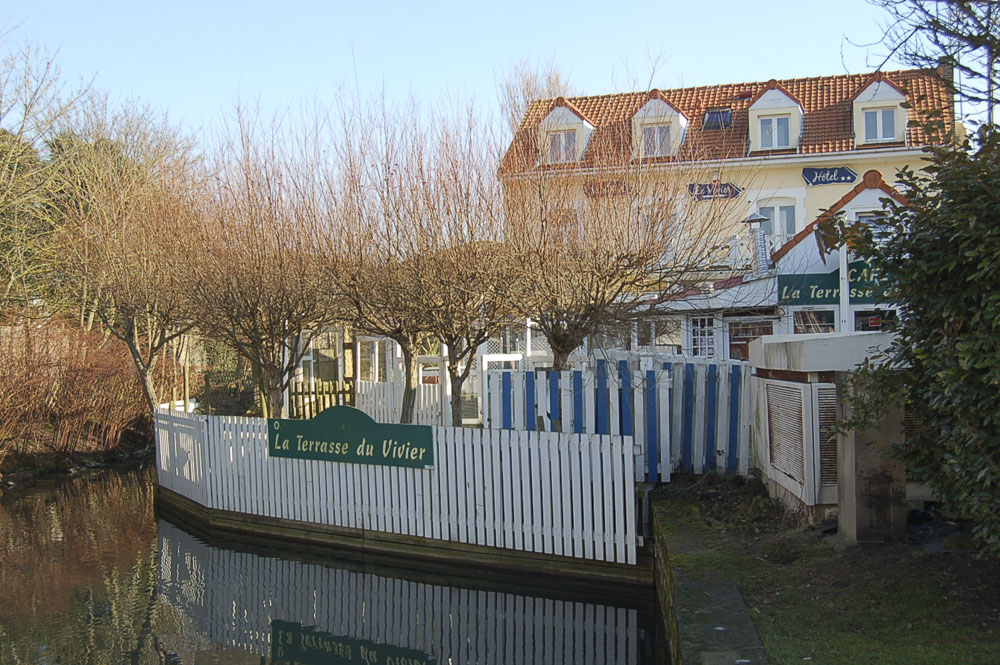 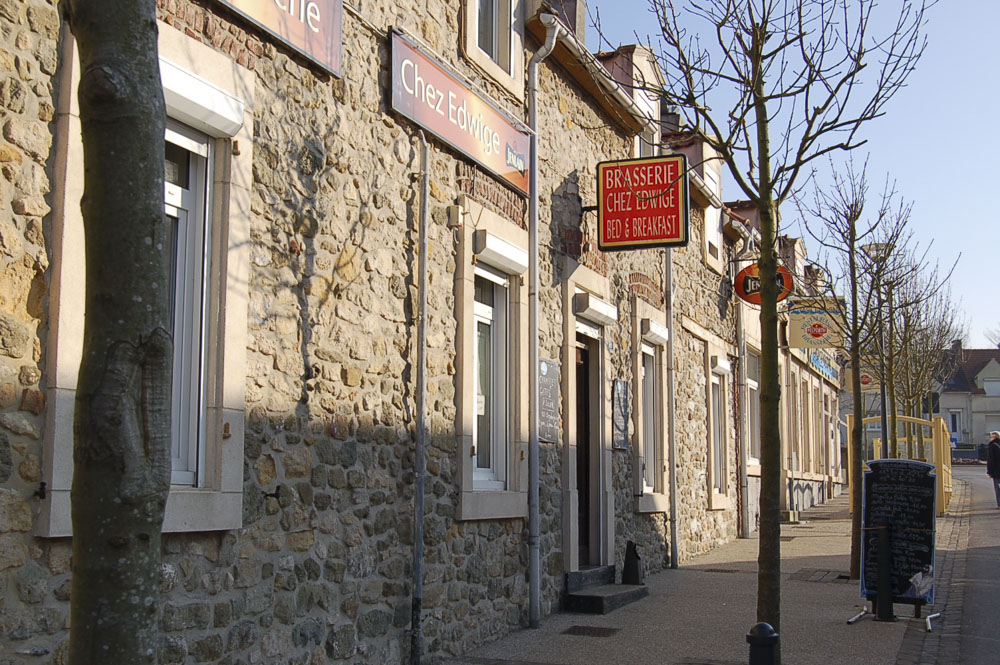 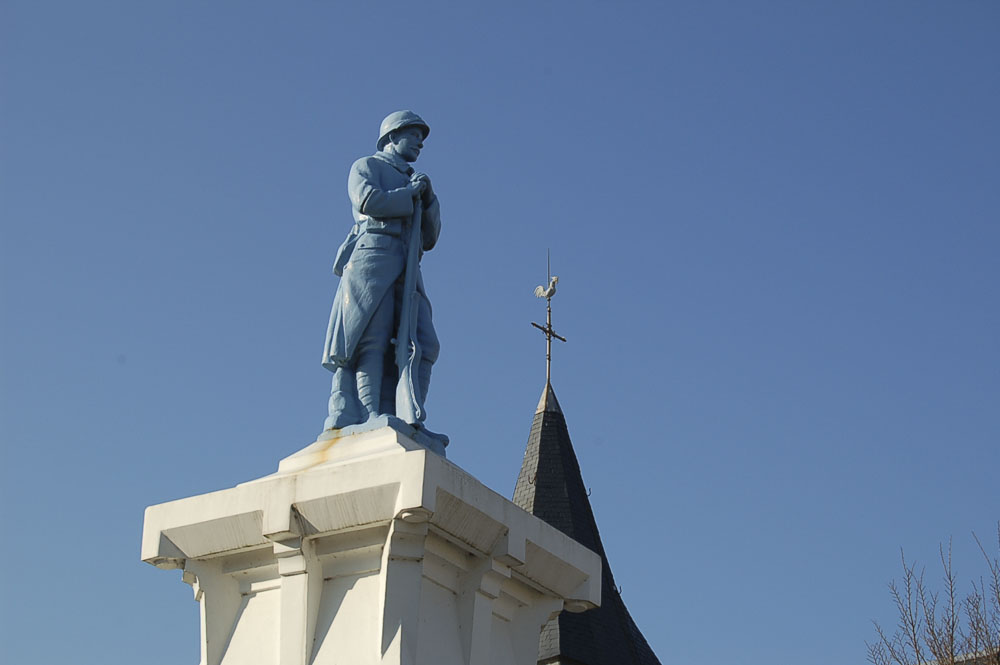 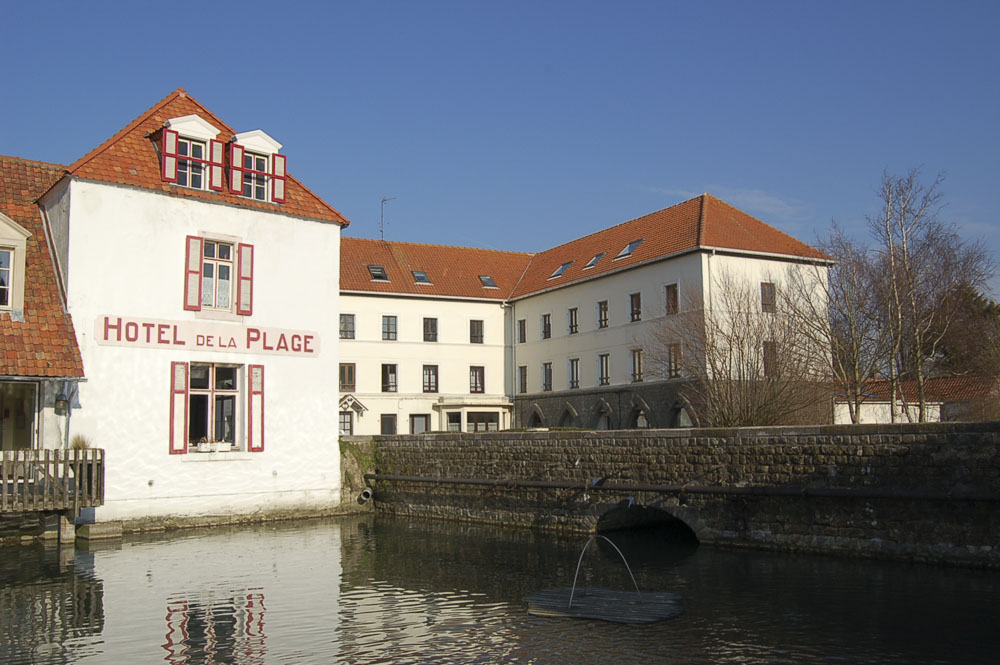 Wissant lies on the coast in the Pas de Calais region of Northern France.  This charming fishing town is located between Cap Gris Nez and Cap Blanc-Nez, a protected area known as the Grand Site National des Deux Caps.  Wissant derives its name from the English words ‘white sand’ and at low tide the beach is exposed with a tide range of more than 8 metres.  Tractors launch the fishermen’s boats, known locally as ‘flobarts’, by towing them out into the waves which is a tradition going back generations and originally done by horses.   Popular with families, the beach attracts lots of visitors especially during the summer months when kite surfing across the sands and sailing are added attractions. Driving into Wissant from the countryside, the pretty sand-duned beach front and promenade are a gentle reminder that the area has changed very little over the years and has much to recommend it.   There are approximately 1,100 residents.    Plenty of beach cafés and restaurants offer excellent seafood with a panoramic view of the bay and the town has some attractive local shops.

Book a Hotel in Wissant

History records that in 55BC, Julius Caesar planned his invasion of Britain from Wissant and sailed his ships to Deal in Kent in preparation for his campaign.  The Mount Fort Julius Caesar is a natural site just outside Wissant named in his honour.

Located at the eastern end of a lagoon which was formed by the sand-dunes in the mid 10th century, Wissant has been a fishing and farming community for a millenium.  From the 7th to the 14th century, the local language was a dialect of Western France called ‘Old Dutch’ and the village was considered to be part of Flanders.

During the Middle Ages Wissant was an important embarkation port for England until the sands silted up the harbour towards the end of the 12th century when the emphasis shifted to Calais.    At the end of the 19th century, huge excavations were made which now form lakes and a nature reserve as well as a substantial building programme along the coast.   Large areas were once heavily exploited by coal mines, chalk and marble quarries, the history of which can be viewed in La Maison du Marbre museum at nearby Marquise.

Wissant was part of the Atlantic Wall, a defence system of coastal fortification built by the Germans during World War II along the Western and Northern coasts of Europe against the anticipated Allied invasion from England.

The flat beaches of the land between Cap Gris Nez and Cap Blanc-Nez are safe for children with entertainment facilities in several locations.

The Museum of the Atlantic Wall  (Batterie Todt) is open daily (except for a few seasonal holiday periods) with a World War II gun turret at Cap Gris-Nez.  The gun emplacement is situated up on the cliffs and was part of the Germans’ formidable line of defences on the north French coast.  Remnants of the bunkers and anti-tank spikes still litter the beaches.  The defences were built by slave labour and were so strong that in 1944 the Allies decided to bypass them and land on the less heavily defended beaches in Normandy.  Amongst the exhibits are uniforms and wartime artefacts as well as a huge 280mm gun with a barrel 35 metres long which was used to shell the coastal towns of Kent.   Surprisingly, this unattractive bunker is located on a beautiful stretch of coastline which is now part of the Boulonnais Nature Park.  With spectacular views across the Channel, walking along this route is a fascinating reminder of the horrors of war amidst the natural landscape of the region.  Observation outposts, ‘pillboxes’ and trenches are much in evidence along the scenic path and the local Yacht Club has been incorporated in a watch-tower on top of a German gun emplacement.  The Commonwealth War Graves Commission cemetery is also a special place to visit.

The Boulonnais Nature Park contains beautiful downland hills and valleys  overlooking wide sandy beaches, sand-dunes and marshes.  There are a variety of valuable habitats to encourage wildlife.  This relatively new park is developing  cycle paths, horse-riding trails, horse drawn carts and walking tours to enable visitors to take in the unique characteristics of the area.  Hiking expeditions of different distances are tailored to individual requests leaving the town hall square on a regular basis.  Birdwatching from strategic cliff top vantage points is very rewarding with flocks of migrating seabirds from Northern Europe and Siberia overflying towards the Atlantic and the North Sea during the Autumn months.

Because of the natural climatic conditions, and the proximity to the TGV and Eurostar railway connections to nearby Frethun, Wissant has become an international haven for surfers who find the wide expanse of the beach and favourable winds perfect for their sport.  Paragliding and sand-yachting bring the young to the beaches throughout the year and all sorts of sailing opportunities (including kayaking) are attracting more and more visitors each season.

The church of St. Nicholas which dates from the 15th century claims to be where Thomas à Becket prayed before returning to England and ‘martyrdom’.

There is a weekly market held in the centre of town on Wednesday mornings from 8.30 to 12.00 and a regional market on Friday evenings 6 pm to 9 pm from April to September.   A festival is held on the last weekend in August to celebrate the sea during which a variety of sea food is on offer along the promenade and music and entertainment takes place throughout the town.

Hotel de la Plage at 1 rue Edouard Houssin, built in 1890,  is near to the beach and is located by a 19th century watermill. The Musée de Moulin (Windmill museum) is now closed to the public but the hotel is built beside the millpond which gives a feeling of tranquillity and calm.   This traditional hotel is full of character with an elegant terrace for the summer and a warm fireplace for the chilly evenings.  The hotel’s restaurant serves good regional cooking and seafood specialities.

Hotel de la Baie de Wissant is situated on the sea front and features a terrace overlooking the sea.  The rooms have good views, some with a private terrace.   A continental breakfast is served in the hotel and there are bars and restaurants less than 300 metres away.    Tennis courts and a golf course are within 3 km. drive.  Affiliated to the Hotel de la Baie is La Chaloupe which is an excellent brasserie/restaurant recommended for its shellfish and locally sourced beef and lamb dishes.    It is a popular place to eat and advance reservations are usually necessary.

Chez Edwige at 9 rue Gambetta, 5 minutes from the beach,  has a few guest rooms for bed and breakfast as well as a fisherman’s cottage which is available for rent.    Simple, tasty food comes highly recommended.

When visiting the Musée de l’Atlantique there is a very good little café offering a welcome beer or glass of wine in the summer months or a coffee with cognac in the winter.  It has a full menu but the moules frites (mussels with chips) are excellent and inexpensive.

By car, Wissant is 14 miles (23km) north of Boulogne at the junction of the D238 and the D940 coastline.  From Paris take the motorway A26 to Calais and then A16 to Boulogne.  Follow directions to Wissant.

Ferries operate from Dover to Calais and the Eurotunnel terminal at Folkestone makes access to the Pas de Calais area very easy. 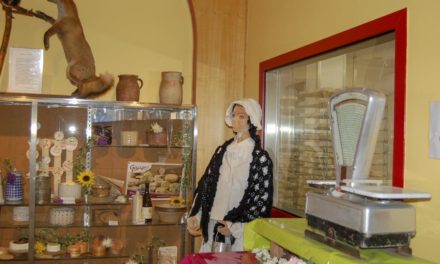 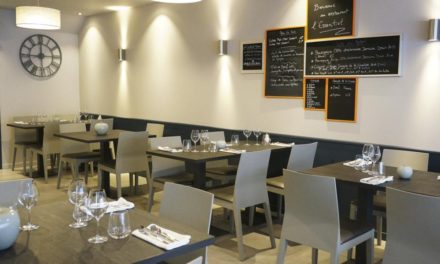 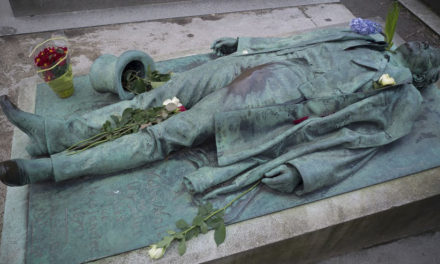